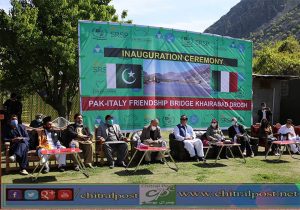 Talking to the local people Emmanuela Bennini said that our country is committed to working with the Pakistan government to build many such projects in many sectors to help transform lives of marginalized and excluded groups.

This bridge is constructed with a cost of PKR. 18 million with the financial support of Italian Agency for development cooperation. As a recognition of the support from the people and government of Italy, SRSP and community decided to name it as “Pak-Italy friendship bridge”. The communities had identified the bridge as an important constraint to their development as they had to travel 10 kilometers to get to the main road. About 450 households benefit from the scheme.

The community members said the absence of the bridge created a lot of problems for service delivery in the valley and they were denied economic opportunities.

Deputy Commissioner Chitral Hasan Abid thanked Italian government for their support and also lauded the services of SRSP and PPAF.

The officials of the SRSP said the bridge was part of programme that was funded by the Italian government in the Bajaur, Upper and Lower Dir and Chitral. Besides infrastructure development, it extended help to improve government facilities in Health and Education Sectors and provide livelihood grants to the communities through a community-driven programmes.

The communities narrated the difficulties they encountered before the bridge was built in improving their living standards.

They urged that the local communities must be closely involved in future programmes to identify the poor as external consultants miss out the local understanding of poverty.

Later, Ms Bennini visited the THQ hospital Drosh where the District Health Officer and staff of the hospital briefed her on the improvements made to the old health centre through improving its water supply, refurbishing of different units and provision of essential supplies and instruments, assistance in fighting Covid-19 and setting up a nursery for children at childbirth.

Later Ms Bennini met women community groups in Drosh who exhibited their handicrafts and narrated the benefits they got from women mobilization and enterprise training activities.

The elders of Drosh hailed the contribution made by the SRSP in the Drosh tehsil, building of 35 km roads in remote Arandu, rehabilitation of government schools and building roads and bridges for Ursoon valley. 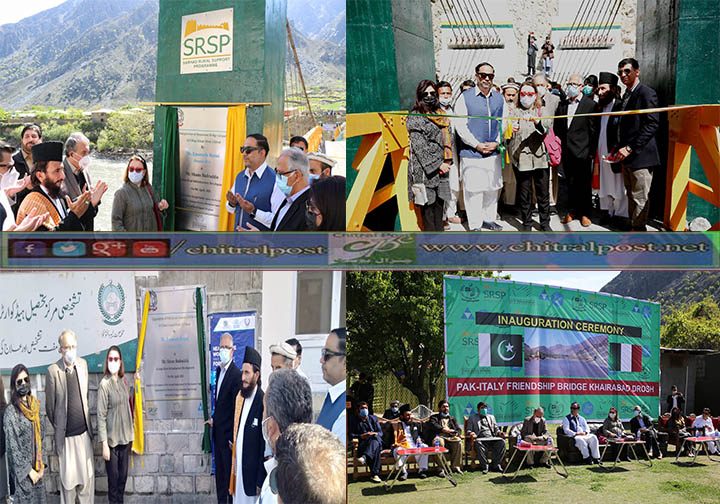 K-P tourism police to get training in Thailand

(Web Desk) ISLAMABAD: A ministerial panel on Wednesday called for major reform in the sugar sector, suggesting a shift in sugarcane pricing on the basis of sucrose content without any government role, freedom to import sugar but controlled export in case of surplus and imposition of heavy penalties for delayed sugarcane crushing and cartelisation by […]