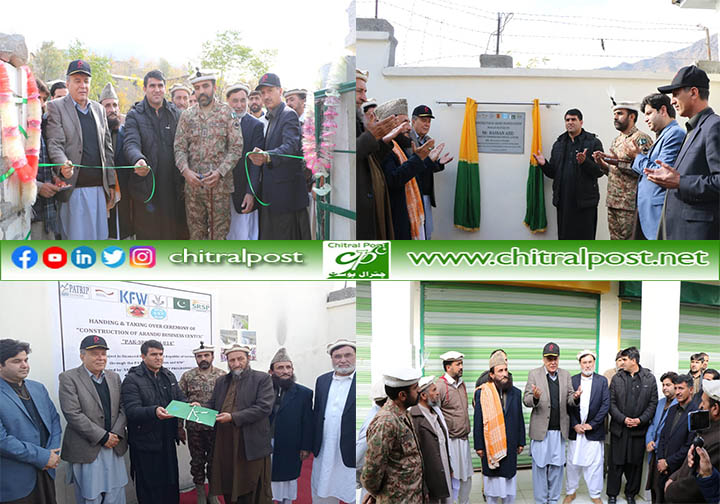 CHITRAL: A community-managed business center was inaugurated at Arandu in Lower Chitral district. The business center is established by Sarhad Rural Support Programme with the financial assistance of PATRIP foundation.

The border town of Arandu in district Chitral connects Kunar and Nuristan provinces of Afghanistan with Pakistan. The business center comprises of 20 shops, offices, a mosque and eight public washrooms. The center is expected to play pivotal role in building cross-border relationships between the peoples of this region.

The CEO of SRSP, speaking on the occasion, said the SRSP had helped build 52 kilometres road in the valley to make it accessible. He said his organization rebuilt 32 government schools and improved with additional rooms, latrines and made drinking water available.

A girls’ hostel was established to promote education, he said, adding that Arandu was one of the most neglected parts of this province with abysmal social indicators. “This investment from the government of Germany will help improve the quality of life in the region and boost ties with border districts,” he added.

The elders proposed sports ties across the border as an initial step. However, it was decided that the matter would be discussed at the government level. Assistant commissioner and the community elders were handed over the ownership documents. The community elders thanked PATRIP Foundation, SRSP, the administration and the Pak Army for making development activities possible in this remote and hitherto neglected region. ­

ISLAMABAD: Chief Justice of Pakistan (CJP) Gulzar Ahmed on Monday asked the federal government to remove Dr Zaraf Mirza as state minister of health. The Supreme Court (SC), while hearing a suo motu case on the corona virus crisis, said that Prime Minister Imran Khan’s cabinet has become ineffective in the fight against the pandemic. CJP Gulzar also questioned the transparency of work done by […]

CHITRAL: The Peshawar Electric Supply Company has failed to ensure the electrification of a girls degree college, a new block of the tehsil headquarters hospital and two other government buildings in Drosh for around two years. A source in communication and works (C&W) department said the Pesco had delayed the provision of transformers for the […]