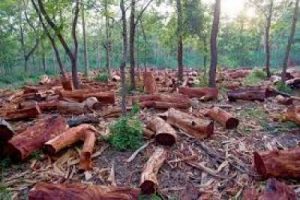 ISLAMABAD: With annual deforestation rate in Pakistan recorded as the world`s highest, the Lahore High Court has observed that such tendency will lead to increase in the spread of life-threatening diseases and ordered the Punjab government, Defence Housing Authority and various other development authorities to make a comprehensive policy for tree plantation and penalizing those removing, cutting or damaging trees.

The country`s deforestation rate has been estimated between 0.2 and 0.5 per cent per annum the highest in the world accounting for four to six per cent decline in its wood biomass per annum, the LHC verdict deplored.

Authored by Justice Jawad Hasan, the judgement, while citing a research report, observed that the natural forest cover had reduced from 3.59 million hectares to 3.32m hectares at an average rate of 27,000 hectares annually.

Citing the 2010 research report by the National Environment Information System (NEIMS), the judgement feared that the natural resources were decreasing at such an alarming speed that all the forest area would be consumed within the next five years.

NEIMS is a project of the United Nations Development Programme (UNDP) detailing the environment, biodiversity and ecological zones in Pakistan from forest to mountains and threatened flora and fauna and species of animal. The report highlighted that only 4.72m hectares or 3.36 per cent of its land mass was covered with forests, as there had been a declining forestation trend since 2000.

The LHC verdict recalled that the value of intangible benefits of forestation was eight times greater than the tangible value of products and services of forestry sector. Many intangible benefits were derived from forest, including oxygen production, watershed value, scenic benefits, ecosystem synergism and a variety of other values essential for human health and quality of life.

The forests also provide a number of crucial ecosystem services like their role in sequestering carbon from the atmosphere, protecting upstream watersheds, conserving biodiversity and gene-pools for future generations and in providing landscape.

Forests are both a source of carbon dioxide when they are destroyed or degraded, and a sink when conserved, managed or planted sustainably, the report said, explaining that 60 to 90 of all terrestrial species were found in forests having widespread economic and medicinal uses still unknown to mankind. Quoting the report, the judgement said the forest vegetation and soils held 40 per cent of carbon stored in terrestrial ecosystems.

As the population grew, the demand for clean drinking water became more acute the court observed, adding that such need for water was in addition to the need for agriculture, sanitation purpose, cooking and other uses.

Until two decades back, no one in Pakistan had ever thought of purchasing water, but at present people had to purchase it because of depletion of forest in watersheds, the verdict said.

According to the judgement, forest and plant cover are necessary to slow runoff and filter rainwater. When trees are in place, the flow of rainwater from downhill to the nearest stream slows down. Once slowed, rainwater seeped down to refill underground storage tanks or aquifers. In addition, water may be absorbed by the roots of trees so that it could cycle back for reuse as rainwater. Forests prevent non-saline drinking-quality water from running off too quickly to mix with the salt water of oceans. Once salty, water takes much longer to reenter the fresh water portion of the hydrological cycle, where it is most useful to humans.

The roots of trees hold soil in place and the fertile soil that is needed to grow crops would otherwise be washed away in rainstorms, decreasing the amount of soil available for agriculture. Rich soil transfers nutrients to food which contributes to human health.

Forests provide multiple benefits to environment, people and animals like they cool air temperature by releasing water vapours into the air while at day time trees generate oxygen and store carbon dioxide that helps to clean air.
Moreover, forests attract wild life and offer food and protection to them.

They reduce light reflection, offer a sound barrier and help guide wind direction and speed. Thus forests help in controlling the level of floods and soil erosion, the court observed in its recent judgement.

The court directed the authorities, including the DHA, development authorities and other relevant institutions to make and adopt comprehensive policies with respect to plantation of trees in urban areas with experience of Urban Plantation Policy and make their own policy under respective laws and immediately start planting of trees with the request to PHA and other departments and maintain the same by imposing fine and penalty to the officers of the area or any citizen.

The court also directed all educational institutes, hospitals and parking areas management to make and implement policy for plantation of trees in open spaces.

Similarly, the Punjab government was also directed to impose penalties and heavy fine on those found involved in cutting, removing and damaging trees.

(Web Desk) ISLAMABAD: A ministerial panel on Wednesday called for major reform in the sugar sector, suggesting a shift in sugarcane pricing on the basis of sucrose content without any government role, freedom to import sugar but controlled export in case of surplus and imposition of heavy penalties for delayed sugarcane crushing and cartelisation by […]