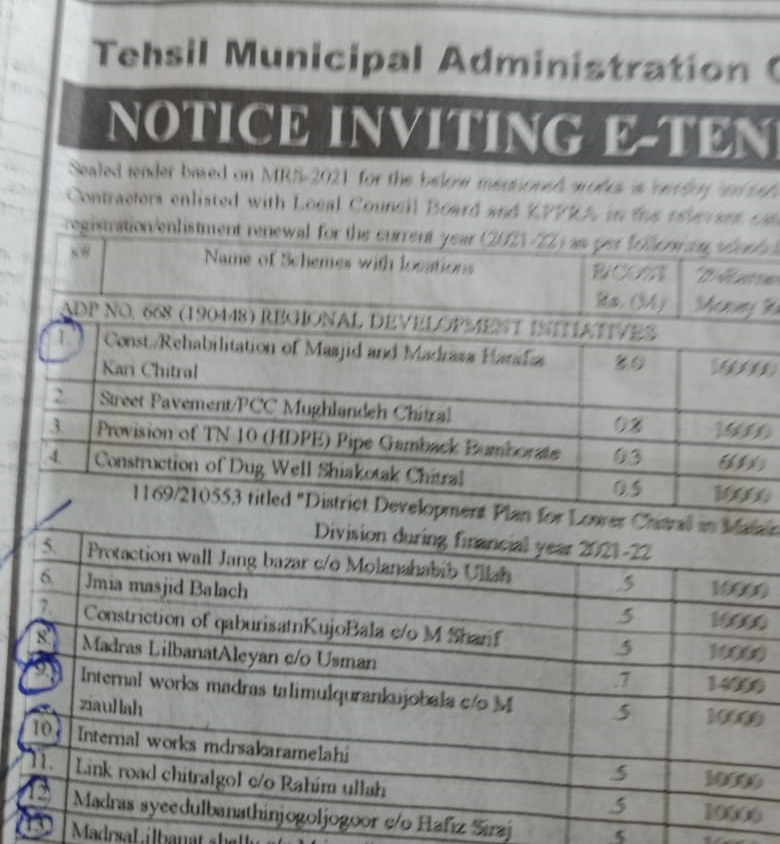 CHITRAL: MPA Chitral Moulana Hidayatur Rehman has allocated 8 million government fund for his own private madrasa situated in Kari village of lower Chitral. The fund is allocated under the ADP No.668. TMA Chitral issued tender for the proposed work and it is learned that work order has been issued to local contractor.

Some sources also revealed that previously a sum of 2 million was also provided for the same private madrasa and a contractor from Ayun carried out work on it.

Sources in Kari village said that their village is facing lot of problems and drinking water supply at the top. We had many times requested MPA to provide fund to resolve water supply issue but instead of providing fund for genuine public need, the elected MPA preferred to allocate funds for his own seminary.

It is also learned from well-placed sources that MPA is asking the contractor to give cash amount to his brother as the physical work has already been done while payments are pending but however the contractor has refused to pay any amount in cash.

Sources told to media that MPA Hidayatur Rehman has also allocated 2 million rupees for his another seminary situated in Khairabad Drosh.

February 24, 2018 By. Muhkamuddin Ayuni CHITRAL: A large number of people on Sunday took out a rally in Chitral town against India for threatening Pakistan of consequences in the wake of the suicide attack on its security forces in Pulwama, occupied Kashmir, on Feb 14. The participants of the rally, who were chanting ‘Death […]

PESHAWAR: The Provincial Tourism Strategy Board has accorded approval to declare Madaklasht as the integrated tourism zone (ITZ) along with Ghanool (Mansehra) and Mankyal (Swat). The approval was accorded in the first meeting of the board held on Tuesday with Chief Minister Mahmood Khan in the chair. The matter would now be presented before the […]