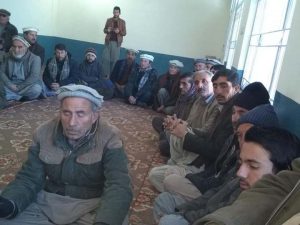 The participants at a meeting highlighted the services of PPP founder Zulfikar Ali Bhutto and Ms Bhutto for the nation especially for the cause of democracy. They also stressed the need for unity and cohesion within the part in order to promote the vision of the two leaders.

The meeting through a resolution also announced a strategy for the party to take part in the next local government election and added that the selection of candidates for the polls would be discussed at a meeting to be held later.

The participants also expressed their concerns over the destruction of the already dilapidated Chitral-Booni road on the excuse of laying a fiber optics and asked the deputy commissioner and the district nazim to make the contractor bound to lay the line away from the road in order to save it from further damages.

The meeting also decided to take a delegation of the PPP Upper Chitral and meet the provincial president of the party to discuss and resolve issues being faced by the workers and activists.

The meeting also expressed concerns over the electricity crisis in Upper Chitral and demanded that the public issue should be resolved on a priority basis. The participants said as a seven-megawatt transformer was available in Koghuzi storeroom so it should be installed in Koghuzi to link Upper Chitral with Golen powerhouse.

March 23, 2020 CHITRAL: Lowari tunnel will be closed at 7pm today (March 23rd) till further orders. However, supply of food and medicines will continue. It was decided in a meeting held in DC office Chitral which was attended by MNA Moulana Abdul Akbar Chitrali, MPA Moulana Hidayatur Rehman, DPO Wasim Riyaz, ADC Hayat Shah […]