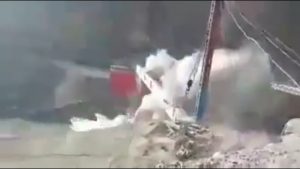 CHITRAL: One of the girders of an RCC bridge being built over Chitral river in front of Green Lasht village in Upper Chitral fell into the river.

However, no one was injured when the girder plunged into the river.

The bridge is being built to connect Oveer valley with other parts of Chitral. Some local people alleged that the contractor was using substandard material in the construction of the bridge due to which the girder collapsed.

In a video available with Chitral Post and also circulating in social media shows that when the girder was being pulled over it fell into the river before it could be laid over the river.

With the incident, the completion of the bridge may face an inordinate delay.

In a statement issued by the provincial minister for C&W Akbar Ayub Khan, it is said that an inquiry into the matter has been initiated. Strict action would be taken against responsible persons, the statement added.