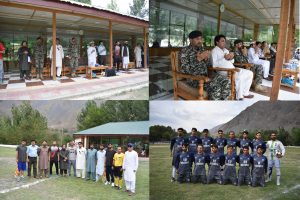 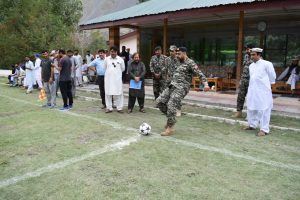 In his welcome speech Hussain Ahmed, secretary DFA Chitral, thanked Col. Moeednuddin for his support and patronage in promotion of football in Chitral. He said that without the support of Chitral Scouts this tournament could never had been materialized. He said that we mark this tournament with Slogan of “Kashmir Baney Ga Pakistan” and the youth of Chitral stand with their armed forces for any call.

Chitral Home district football tournament is first of its kind mega football event in Chitral. Winner team would receive cash prize of Rs. 100 thousand while the runner up team will get 50 thousand rupees. There are also cash prizes for man of the match, top goal scorer and best goal keeper. 32 teams, including teams from Gilgit and Swat are participating in the tournament.