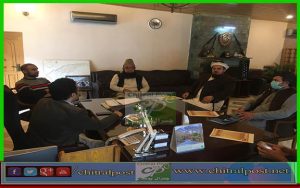 CHITRAL: Lowari tunnel will be closed at 7pm today (March 23rd) till further orders. However, supply of food and medicines will continue. It was decided in a meeting held in DC office Chitral which was attended by MNA Moulana Abdul Akbar Chitrali, MPA Moulana Hidayatur Rehman, DPO Wasim Riyaz, ADC Hayat Shah and Major Usman of Chitral Scouts. The meeting discussed current scenario and reviewed the steps taken by concern quarters.

Three days ago, the administration announced to shut the tunnel for public transport vehicles but the decision caused trouble to hundreds of people as they remained stranded at the tunnel.

After over four hours, the tunnel was opened. The arrival of people in Chitral continued and the administration then announced that the tunnel will remain open from 9am to 7pm daily.

In order to avoid the spread of the virus through those coming from other cities, the administration today decided to close the tunnel till further notice.

While a lockdown was observed in major towns such as Chitral, Drosh and Booni, life remained normal in other areas with shops open.

CHITRAL: The Peshawar Electric Supply Company has failed to ensure the electrification of a girls degree college, a new block of the tehsil headquarters hospital and two other government buildings in Drosh for around two years. A source in communication and works (C&W) department said the Pesco had delayed the provision of transformers for the […]

August 27, 2019 By. Bashir Hussain Azad CHITRAL: An ideal working relationship exists between the military and civilian administration in Chitral. The military and the civilian admin are on same page and that is why issues of the locals are being resolved smoothly. Besides, impediments in the way of law and order and peace are […]

(Web Desk) ISLAMABAD: The low voter turnout during the NA-249 by-election held a day earlier in Karachi indicates that the public is losing confidence in the electoral process, says Information Fawad Chaudhry. In a message on Twitter on Friday, the information minister once again asked the opposition to consider Prime Minister Imran Khan’s suggestions for […]