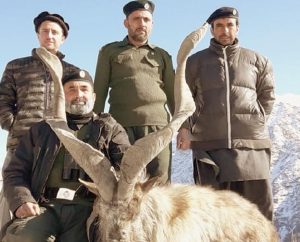 CHITRAL: An American national hunted Kashmir markhor with horns measuring 50 inches in Toshi Shasha conservancy here the other day.
He had obtained the permit from the wildlife department at a cost of 150,000 US dollars.
Divisional forest officer of wildlife division, Chitral, Mohammad Idrees told Dawn on Saturday that the American national named James Kevin had to wait for two days to find a markor of larger size in different parts of the conservancy due to heavy snowfall.
He said on the third day of the hectic search, he chose a markhor in Toshi segment of the conservancy situated opposite to the Garam Chashma Road, and shot it dead from a close range.
Mr Idreez said although the American hunter had also obtained a permit of hunting an ibex he left Chitral without doing it.
It is to be recalled here that an American had hunted a Kashmir markhor from the same conservancy in December last year, which was the first trophy hunting of the season.
The forest officer said 80 per cent of the permit fee would go to the local community for their collective development.
He said the contribution of the local community in the conservation process had worked well leading to an increase in the population of Kashmir markhor, which had been declared one of the endangered species in 1970s in the area due to excessive poaching.

January 12, 2018 ISLAMABAD:  The Safety Investigation Board (SIB) tasked with a probe into the 2016 crash of a PIA’s domestic flight PK-661 that killed all the 46 people onboard, has found a ‘lapse’ on the part of PIA and a ‘lack of oversight’ by Civil Aviation Authority (CAA) that may have led to the […]

December 25, 2018 ISLAMABAD: Benazir Income Support Programme (BISP) Chairperson Dr Sania Nishtar on Sunday said there was a need to plug critical gaps in the programme and redesign the payment mechanism. `BISP has many legacy issues which successive managements have strived to address. Several gaps have been plugged but many critical gaps remain to […]