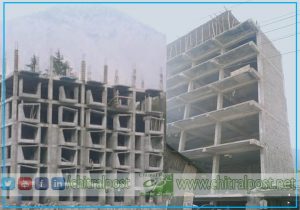 CHITRAL: Chitral is witnessing competitive increase in the construction of high rise buildings particularly in Chitral town and Drosh that is dangerous as the area is on dangerous seismic zone. Regardless of the fact that Chitral is located in sensitive seismic zone, the builders continued to construct multi-storey buildings violating construction Standard Operating Procedures. These high rise buildings are becoming a permanent threat not only to the people living and working in these compound but also too many others residing nearby.

Source in concerned government department told Chitral Post that due to sensitivity of this region only three to four-storey buildings are admissible in this area that too subject to fulfillment of certain building codes.

However, a construction engineer having more than 2 decades experience in this field opined that even a four story building is not safe in such a zone. Only two-storey building should be appropriated, he added.

A geological experts said that Chitral is a very dangerous zone for seismic activity and jolts in 2005 and again 2015 were enough to get alarm bells ringing but the authorities failed to take precautionary measures.

He said in the earth quakes the epic centers were in the hindukush region but the depth of both were too deep that’s why damages were not too high.

However both the quakes left many buildings, including the RCC structures damaged. Erecting high rise buildings will be a permanent danger for everyone, says another construction expert.

It is learned from sources in local government department that the competition of building tall structure is contradictory to the rules and SOPs.

The builders also ignore arranging proper parking and wash room facilities in these buildings. But there is no one available to get SOPs, rules and regulation implemented by the builders.

Public circles have demanded the district administration and PDMA to take notice of this issue and take steps may be taken to stop such activities. They have demanded strict adherence to building codes and SOPs.

February 08, 2019 ISLAMABAD: Pakistan has made formal requests to 10 more countries under the OECD mechanism as well as Switzerland separately for exchange of information about those Pakistanis who stashed their assets abroad to evade taxes. “We have made requests to 10 more countries for getting automatic exchange of information and so far we […]

CHITRAL: Chitral witnessed record one-day high positive cases of nine corona patients on Thursday, taking the tally in the whole Chitral to 28. The nine corona cases included five women, a 12-year-old girl among them. They had travelled to Chitral from Peshawar and were kept in quarantine in Chitral town and Drosh. Those who have […]