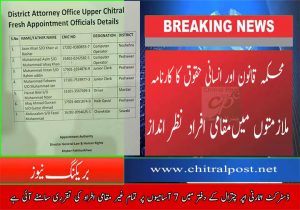 CHITRAL: Directorate General of Law & Human Rights Khyber Pakhtunkhwa has appointed 7 non local persons in the newly established District Attorney Office Upper Chitral. According to reports surfaced via social media as many as 7 people were appointed against different vacant posts but none of them is a local of Upper Chitral. According to the document 2 computer operators, 2 junior clerks, 1 driver, watchman and naib qasid were appointed to the Attorney office of newly established district upper Chitral but surprisingly no one of the fresh appointees belongs to Upper Chitral district. The appointees are residents of Peshawar, Swabi, Nowshera and Mardan.

Local residents of Upper Chitral have widely expressed their reservations on this matter and have asked the provincial CM to take notice of this irregularity.