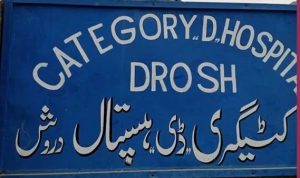 CHITRAL: The Peshawar Electric Supply Company has failed to ensure the electrification of a girls degree college, a new block of the tehsil headquarters hospital and two other government buildings in Drosh for around two years.

A source in communication and works (C&W) department said the Pesco had delayed the provision of transformers for the ‘external electrification’ of those buildings even after receiving Rs5.459 million for the purpose.

He said under procedure, once government building was in place, the C&W department deposited the requisite fee for external electrification, including provision of a transformer in case of a large building.

The source said the building of muhafizkhana (record room) in Chitral city was also completed two years ago but land records had yet to be shifted to it as it didn’t have electric supply.

He feared that further delay in the building’s electrification would damage records.

The source also said the building of the Government Higher Secondary School, Barenis, had been unoccupied and without electric supply for two years despite the payment of power connection charges to the Pesco.

He said the department had sent many reminders to the Pesco for the provision of transformers and other equipment, but to no avail.

A Pesco sub divisional officer confirmed that the C&W department had deposited the requisite amount with the electric company.

He insisted that codal snags had delayed the purchase of transformers and equipment.