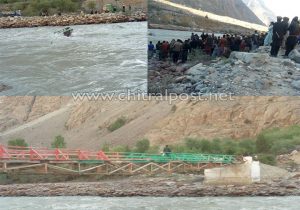 CHITRAL: Eight people gone missing when a passenger land cruiser fell off a bridge into the river in a remote village of Yarkhun valley of Upper Chitral. The tragic incident occurred late night.

The accident victims included a man and his wife.

According to local police the incident occurred at Zulilasht while crossing Unauch bridge. The vehicle was on its way to Yarkhun from Chitral town.

It was carrying 10 people, including two women, and two of the men saved their lives by swimming to safety.

December 21, 2019 PESHAWAR: As many as 15 public sectors universities of Khyber Pakhtunkhwa are facing severe financial crisis. The leading universities have stopped payment of salaries and pension. On the other hand, future of several thousand students is also at stake. KP government has not yet issued any fund to any university as grant […]

December 13, 2019 PESHAWAR: In a departure from past practices, the provincial government has issued 50 per cent additional funds for development schemes in 29 sectors during the fiscal year 2019-20. However, the provincial finance department has imposed a ban on transferring funds issued for specific schemes to use them for any other purpose other than […]