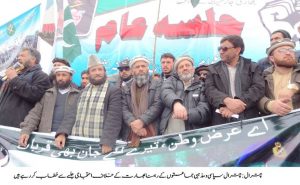 CHITRAL: A large number of people on Sunday took out a rally in Chitral town against India for threatening Pakistan of consequences in the wake of the suicide attack on its security forces in Pulwama, occupied Kashmir, on Feb 14.

The participants of the rally, who were chanting ‘Death to India’ and other slogans, after passing through different streets gathered at Ataliq Chowk. The gathering was chaired by Jamaat-e-Islami (JI) Chitral chief Molana Jamshed Ahmed.

They said any misadventure towards Pakistan would be tantamount to India signing its own death warrants. They said the uprising in occupied Kashmir was an indigenous movement against the oppression of the Indian forces.

But in order to conceal its rampant violations of human rights, India is tying to hoodwink the world by pointing finger at Pakistan for the attack on its forces in Kashmir.

The protesters burnt an effigy of Indian Prime Minister Narendra Modi and dispersed.

K-P tourism police to get training in Thailand